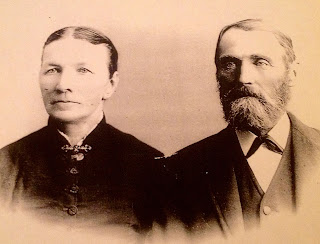 Amanuensis Monday is a blogging prompt used by many fellow genealogy bloggers. An Amanuensis is a person employed to write what another dictates or to copy what has been written by another.

A couple of weeks ago, I shared a newly-discovered (by me, anyway) photo of my third great Claus Schlichtmann and Anna Sophia von der Lieth. Claus and Anna Sophia were early pioneers of my hometown, Tracy, California, but I didn't know very much about them until I stopped in for a visit at the Tracy Genealogical Society office about six weeks ago. Among the photos and records that documented the lives of my Schlichtmann and Bruhns families in Tracy, I found a hand-written account of how Claus and Sophia came from Germany to make a life for them and their children in California. The story was written by one of Claus and Sophia's granddaughters, and she notes that her information came from interviewing "a lot of people who might know or remember" and "it may not be totally correct." In any case, it's a compelling story, and it has motivated me to continue my research into the Schlichtmann family in Holstein, Germany.

Here are images of the hand-written story, and I've transcribed the text below. 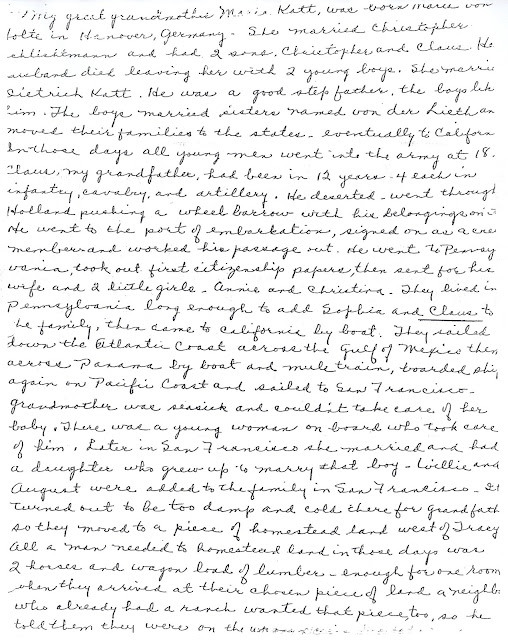 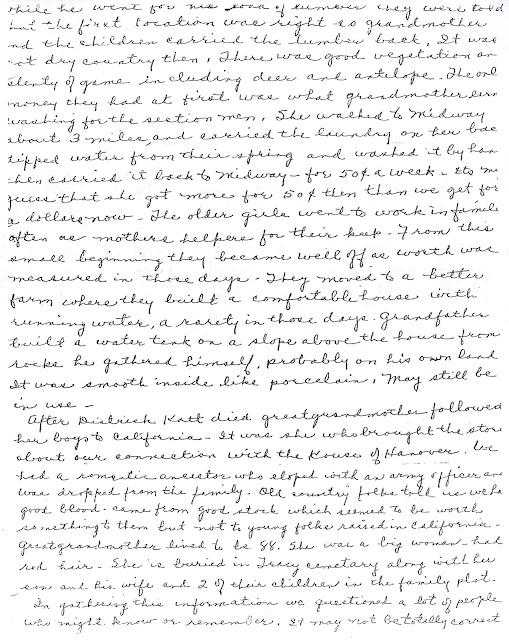 Here's the story of Claus and Anna Sophia Schlichtmann, as written by their granddaughter:


My great grandmother, Maria Katt, was born Maria von Holte in Hanover, Germany. She married Christopher Schlichtmann and had 2 sons, Christopher and Claus. Her husband died leaving her with 2 young boys. She married Dietrich Katt. He was a good step father, the boys liked him. The boys married sisters named von der Lieth and moved their families to the States, eventually to California. In those days, all young men went into the army at 18. Claus, my grandfather, had been in 12 years, 4 each in infantry, cavalry and artillery. He deserted, went through Holland pushing a wheel barrow with his belongings on it. He went to the port of embarkation, signed on as a crew member and worked his passage out. He went to Pennsylvania, took out first citizenship papers, then sent for his wife and 2 little girls, Annie and Christina. They lived in Pennsylvania long enough to add Sophia and Claus to the family, then came to California by boat. They sailed down the Atlantic Coast across the Gulf of Mexico then across Panama by boat and mule train, boarded ship again on the Pacific Coast and sailed to San Francisco. Grandmother was seasick and couldn't take care of her baby. There was a young woman on board who took care of him. Later in San Francisco she married and had a daughter who grew up to marry that boy. Willie and  August were added to the family in San Francisco. It turned out to be too damp and cold there for Grandfather, so they moved to a piece of homestead land west of Tracy. All a man needed to homestead land in those days was 2 horses and a wagon load of lumber -- enough for one room. When they arrived at their chosen piece of land a neighbor who already had a ranch wanted that piece, too, so he told them they were on the wrong piece and directed... (writing is illegible here). While he went for his load of lumber, they were told that the first location was right, so Grandmother and the children carried the lumber back. It was not dry country then. There was good vegetation and plenty of game including deer and antelope. The only money they had at first was what Grandmother earned washing for the section men. She walked to Midway, about 3 miles, and carried the laundry on her back, dipped water from their spring and washed it by hand, then carried it back to Midway -- for 50¢ a week. It's my guess that she got more for 50¢ than we get for a dollar now. The older girls went to work in families, often as mothers helpers for their keep. From this small beginning they became well off as worth was measured in those days. They moved to a better farm where they built a comfortable house with running water, a rarity in those days. Grandfather built a water tank on a slope above the house from rocks he gathered himself, probably on his own land. It was smooth inside like porcelain. May still be in use.

After Dietrich Katt died Great Grandmother followed her boys to California. It was she who brought the story about our connection with the House of Hanover. We had a romantic ancestor who eloped with an army officer and was dropped from the family. Old country folks told us we had good blood, came from good stock which seemed to be worth something to them but not to young folks raised in California. Great Grandmother lived to be 88. She was a big woman, had red hair. She is buried in the Tracy cemetery along with her son and his wife and 2 of their children in the family plot.

In gathering this information we questioned a lot of people who might know or remember. It may not be totally correct.

(Note: The writer's great grandmother, Anna Maria von Holte Schlichtmann Katt, actually lived to 98, and not 88, per the inscription on her gravestone.)

So, I think that the granddaughter who wrote this may have been Annette Genzen Kniveton, who was the daughter of Claus and Anna Sophia's daughter, Anna Maria Schlichtmann Genzen. I'm not completely sure if this is the case, and Annette passed away in 1990. In any case, this little bit of history now has me excited to delve further into our family story before Claus came to the States. I want to know more about Claus' father who died so young, and I'm dying to find out about our alleged connection to the House of Hanover (royalty!).

Meanwhile, here's how I'm descended through this line:

Print Friendly
Posted by Wendy B. at 8:01 AM 1 comments

Today is the last day of the annual Alameda County Fair in Pleasanton, California. Going to the fair has always been a family tradition for us. My sister and I used to bring our 4-H lambs to show and sell at the San Joaquin County Fair, and we loved going to the Alameda County Fair with our cousins when we were kids. My Grandpa John Bartram also enjoyed going to the fair each year, but not for the rides and games. He liked to bet on the ponies! I remember going to the fair with him as a kid, and he'd give us a bit of money for games and cotton candy while he'd head up to the horse racing stands. What I didn't realize is that he started that particular tradition with my mom when she was a kid!

Here's a photo of Grandpa John with our family friend, Bud. As Mom tells the story, Grandpa and Bud decided it was a good day to go to the races, and my mom and her cousin, Stan, also wanted to go for the rides and games. Grandpa gave them each a wad of money and sent them on their way. Then, he and Bud headed up to the races enjoy a few (or more) beers and try their luck with the horses. When they were done (we don't have any recollection of how much money they won or lost that day), they headed back down to the midway and decided to document the occasion with a photo booth picture:
Even if they didn't win big that day, it looks like they had a lot of fun at the fair!!

My sister, Cindy, happened to be visiting us during the fair this year, so she, our cousin, Leslie, and I went to the Alameda County Fair with Cindy's boys and Leslie's husband and daughter. The young kids had a great time, and the three of us "old" kids couldn't resist squeezing into a photo booth. It was just like old times!

Print Friendly
Posted by Wendy B. at 2:54 PM 1 comments