You think you know all there is to know about a family member, and then the secrets start pouring out... I always knew that my Great Uncle Dutch (Grandpa John's older brother, Raymond) had been married to his wife, Helen Prowse, until his horrible death in 1954. What I didn't know is that he had been married once previously. Apparently, none of his friends and family knew, either, until after Dutch and his first wife Olive (Ollie) Frager, had already been married for a year!

This little news nugget in the July 19, 1934, edition of the Hayward Daily Review, tells the story: 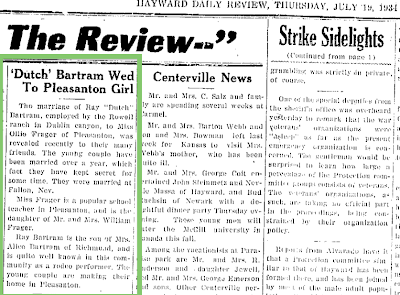 Here's what the article says:

The marriage of Ray "Dutch" Bartram, employed by the Rowell ranch in Dublin canyon, to Miss Ollie Frager of Pleasanton, was revealed recently to their many friends. The young couple have been married over a year, which fact they have kept secret for some time. They were married at Fallon, Nev.

Miss Frager is a popular school teacher in Pleasanton, and is the daughter of Mr. and Mrs. William Frager.

Ray Bartram is the son of Mrs. Alice Bartram of Richmond, and is quite well known in this community as a rodeo performer. The young couple are making their home in Pleasanton.

My guess is that Ollie and Dutch met while rodeoing together. I've seen both of them mentioned as winners in the various rodeos around the area. Ollie and my Aunt Grace Bartram are also mentioned as friends in various news accounts. I wonder why Uncle Dutch and Ollie kept their secret for so long?

In any case, theirs seemed to be a short-lived romance: By July 1937, the Reno Evening Gazette shows that Ollie had filed for divorce against Uncle Dutch. Uncle Dutch and Aunt Helen (Prowse) subsequently applied for their marriage license in Reno in July 1943.

On a side note, Ollie isn't the only Frager to have married into the Bartram family: my Great Aunt Mildred (Millie) Bartram (another of Grandpa John's many sisters) married Manuel Frager, who I believe was a cousin to Ollie.

Print Friendly
Posted by Wendy B. at 8:22 AM 3 comments

Today would have been my beloved Grandpa John's 102nd birthday! Grandpa always liked a good celebration, so I think I'll have a drink in his honor tonight. Meanwhile, here's the blog post I wrote two years ago for his 100th birthday. Enjoy!

If you've been following my posts, you know that I have a huge soft spot for my maternal grandpa, John Bartram. Today would have been Grandpa John's 100th birthday, so I'm dedicating this blog post to him.

I've already written about Grandpa's rodeo exploits and his knack for telling tall tales. Here's a little bit more about his life. John Bartram was born on April 4, 1911, in Allen, Kansas, to Joseph and Alice Veale Bartram. He was the fourth youngest of 17 (!!) kids. He and his siblings grew up on his father's farm, and he left school after third grade to help out with the necessary chores that kept this large ranching family alive, including farm work, carpentry and horse shoeing.

Grandpa had the adventurous spirit that was so prevalent in many of my ancestors. In 1924, at the young age of 13 years old, he made his first trip to California, hopping a west-bound freight. He stayed here for one year, working on ranches in the Clearlake area, before heading back home to Kansas. He again returned to California in around 1927 at the age of 16 (again riding a westbound freight train), and this time he stayed for good. He landed a job at the Rowell Ranch in Dublin Canyon (between Hayward and Dublin) where his brother, Dutch, was working as ranch foreman. He worked at the Rowell Ranch until the early 1950s.

In 1932, Grandpa began his career as a professional rodeo performer, competing in rodeos all over the west for over 20 years. He bulldogged and roped steers and rode broncs and bulls. He joined rodeo greats Johnny and Frank Schneider and Joe Berl to make up the American team of rodeo riders sent to the World Games in Australia in 1936, where they competed against cowboys from Russia, Australia and other countries. He also participated in the rodeo portion of the World’s Fair in 1939 in San Francisco. This was a dangerous sport, but he competed with gusto. At one rodeo, Grandpa was bucked off a bull and broke his back.  He recovered and continued his rodeo career, but the injury stayed with him through his life.

In 1936, Grandpa met a pretty little rodeo queen at the Livermore Rodeo: my grandmother, Donna Madsen. They fell in love and were married in Reno, Nevada, on March 26, 1938. Grandma and Grandpa had four children: Clinton James, Brenda Rae, Rebecca Elizabeth (my mom); and Clay John. In 1959, Donna and John were involved in a terrible automobile accident which left my grandma brain damaged. She passed away in 1966, leaving Grandpa John to care for the family.

As a grandfather, he was wonderful to all eight of his grandchildren. He was loving and attentive, and seemed to enjoy spending time with us. We probably didn't realize it at the time, but my sister, Cindy, and I were fortunate that Grandpa lived with us for part of our childhood. Here are some of my memories of growing up with Grandpa John:

Grandpa John passed away on August 15, 1987. He had suffered for years from the effects of alcoholism, emphysema and, finally, lung cancer (not to mention a broken heart from losing his Donna). He was a strong guy with a strong heart, though, and fought these diseases for far longer than anyone expected he could. It was still quite a blow to all of us when we lost him. As I think of Grandpa John on this 100th anniversary of his birth, I'm happy to remember his warmth, humor, resilience and love. Happy Birthday, Grandpa John!

Print Friendly
Posted by Wendy B. at 8:47 AM 2 comments

I come from a family of deer hunters on both my Bartram and Brittain sides. I remember well the beginning of deer season when I was growing up. My dad, uncles, grandfathers, etc. would all get ready to head up to Kennedy Meadows in the Sierra mountains, and we'd all wonder what they were going to come back with: hopefully enough deer for Uncle Jimmy to make some of his amazingly delicious deer jerky. Oh, how I miss that jerky...

While I'd always heard the hunting stories of the men in my clan (some of them tall tales, I'm sure), I had no idea that at least one of my female relatives was quite the shot, herself. Since I've subscribe to a couple of the online newspaper archives that are out there, I'm finding out all sorts of fun things about my family. Here's an August 2, 1932, Oakland Tribune newspaper article that tells the story of my great Aunt Grace (1913-1975, and Grandpa John's sister) bagging the very first deer of the season!
The article is a bit hard to read, so here's what it says:


(Caption under the photo: It took two girl hunters to bag the first deer of the season in the Livermore hills. One shot from the rifle of Miss Grace Bartram (left), of Castro Valley, and this three-point, 180-pound buck was downed. Miss Bartram was accompanied on her first hunt by Miss Elizabeth Rowell, also of Castro Valley. -- Wallace photo)

One shot from Miss Bartram's rifle and the first deer of the Livermore hills, one of the state's principal hunting sections, was bagged.

Miss Bartram said it was the first time she had ever been deer hunting. She confessed to a slight case of "buck fever" after the the animal was downed, but today was back in the hills with Miss Rowell again on the hunt.

Taken to Don Harder's sports emporium here, Miss Bartram's deer was found to weigh in excess of 180 pounds. She won the Harder cup for the first deer bagged in this section.

Not bad for her first shot of her first hunt on the first day of deer season!!

Print Friendly
Posted by Wendy B. at 8:50 AM 3 comments

Today would have been my Grandma Edith's 93rd birthday. Here's the post I wrote two years ago to celebrate this wonderful lady's birth!


My paternal grandmother, Edith Vivian Hunt Brittain, was born on this date, April 1, in 1920. And she was no fool! Since I've been following in Grandma Edith's genealogy footsteps, I'd like to take a moment to honor her memory.

Edith Vivian Hunt was born in Slick, Creek County, Oklahoma to James William "Earl" Hunt and Ethel Modina Martindale Hunt. She was the older sister to Edgar James "Bud" Hunt and George Lee Hunt. She grew up in Oklahoma, and that's where she married my grandfather, Woodie Leroy Brittain, on August 18, 1938. They then moved to California shortly after that, settling in Hayward. There, Grandma and Grandpa had one son: my dad, William Lee Brittain, on October 28, 1942.

Grandma and Grandpa stayed in the East Bay Area, eventually moving to Livermore. This is where my sister, Cindy, and I spent most of our time with Grandma Edith, and where our fond memories of her live. Grandma Edith was a wonderful grandmother! She was a bit childlike, herself, so she had no problem keeping up with Cindy and me, and seemed to love playing with us for hours on end. Here are some of my dearest memories of spending time with Grandma Edith: 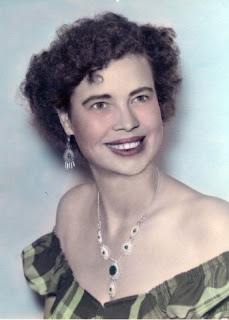 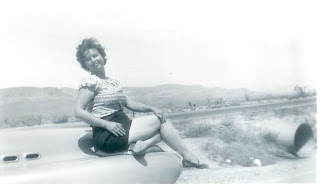 Grandma was also a breast cancer survivor, and battled that beast with bravery. She eventually was diagnosed with Alzheimer's disease at some point during my teenage years. It was brutal for all of us to watch her decline and see her once curious mind and playful disposition deteriorate. She finally passed away on June 2, 1993, but we really lost her long before then. She's buried at the National Cemetery in San Bruno, California, and I'm lucky that I live near enough that I'm able to visit and pay my respects fairly often. I still miss Grandma Edith, and I'm proud to honor her on this special day.

Print Friendly
Posted by Wendy B. at 5:29 PM 0 comments