When I was growing up, one the pieces of furniture that was always around the house was this cute, little drop-leaf table that my mom was very fond of. I knew that it had been a wedding present for my great grandparents, Lars Hansen Madsen (Grandpa Louie) and his wife, Johanna Bruhns, but I didn't know its whole story until fairly recently. 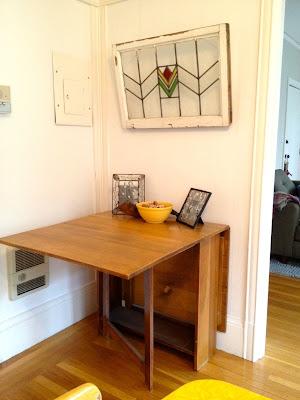 Louie (1893-1971) and Hannah (1886-1965) married on April 4, 1917, in San Francisco, California. I don't know who gifted them this wonderful drop-leaf table, but it has remained in the family, mostly, ever since. A little over a year ago, when I moved into my current apartment, my mom told me that she remembered the table being in her family when she was a young girl. This means that Grandpa and Grandma Madsen must have given the table to their oldest daughter and my maternal grandmother, Donna Madsen Bartram (1919-1966). Mom said that the table, by that time, was pretty scratched up and not in the best of shape, likely due to the family moving around. However, she always loved the little table and had hoped to have it for her own, someday, when she got married herself.

At some point, after my Grandpa John and Grandma Donna were in a horrible car accident in 1959, and Grandma was in poor heath due to her head injury and other ailments, Grandma Donna's best friend, Marie, came to the house and took the little table away. Mom was understandably disappointed: it seemed that this piece of her childhood would no longer be hers. However, when my mom and dad got married in 1964, Mom got an amazing gift that she wasn't expecting: Marie had taken the table, but not to keep for herself. She'd had the piece refinished to its original glory and gave it to Mom and Dad for their wedding!

As I mentioned above, the table always had a special place in our various family homes when I was growing up, and I think I loved it just as much as my mom did. I was always careful not to scratch it when dusting the furniture, and I hoped that someday Mom and Dad would pass it down to me, perhaps as a wedding gift. 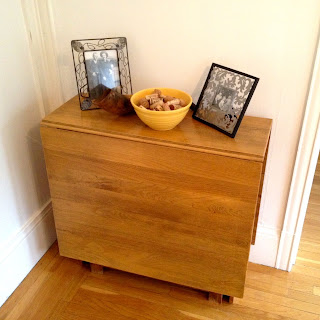 Well, the years have passed, I'm a middle-aged woman and I'm still not married (it's ok -- I'm quite happy as a single girl!). So, when I moved into my darling 1920s apartment -- complete with built-ins, original hardwood floors and brimming with character -- I knew that Great Grandma and Grandpa Madsen's drop-leaf table would be a perfect addition to my new home. One day, I gathered the courage to make my case to Mom: I may or may not ever get married, but I'd really love to have that table someday, and would she mind offering it to me as a house-warming gift? As luck would have it, she and her husband, Rodney, were already looking for a bigger piece of storage furniture, and the drop-leaf was taking up space where that new piece would go. So, they loaded it up in their pickup truck and brought it to me that very weekend!!

I see our family treasure every morning when I walk out of my bedroom and head down the hall to get ready for my day. It holds Grandpa John and Grandma Donna's wedding photo and a Christmas picture of my Mom, Aunt Brenda and Uncle Jimmy when they were very little (even before Uncle Clay was born). I need to have Great Grandma and Grandpa Madsen's photo framed and included on the table, in a place of honor among their family. But I think of them both often, and I think they would be happy that their great grand daughter still cherishes this lovely piece of furniture that was given to them as they started their own lives together nearly 100 years ago.

Print Friendly
Posted by Wendy B. at 1:00 AM