Not So Wordless Wednesday: Madsen Family in 1912

Once again, I've been contacted by a cousin wanting to share family pictures and stories. I'm always happy when my new-found cousins are excited for me to post their treasures here on my blog because I know how much it means for all of us to have these rare glimpses into our families' pasts.

So, thanks to my cousin, Jim Cole, for this gem! This handsome family is Jim's grandparents, Han Terkelsen Madsen and Maren Christiansen Caspersen, their six children, AND Hans' youngest brother, Lars Hansen Madsen. Yep, that handsome young Danish chap standing in the back with his hand on his hip was my Great Grandpa Louie! 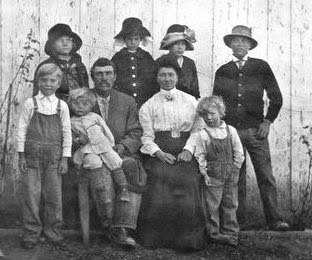 Hans came to California from Aero, Denmark, in 1891. Born in 1870, he was the oldest of ten children and 23 years older than his little brother, Lars, who followed him to Livermore, California, in 1908.

Here are the Madsen family members in this photo, which I think was taken in about 1912, likely in Livermore:

Cousin Jim Cole is the son of May Christine Madsen, and he's been sharing wonderful stories about his memories of my Grandpa Louie, whom they all called either 'Little Louie' or 'Uncle Louie,' and my Great Grandma Hannah. Jim is visiting our families' homeland in Aero, Denmark, later this summer, and I can't wait to hear more stories when he returns!