A few weeks ago, one of my dad's first cousins, Ann, contacted me to see if my sister and I would like a couple of things that had belonged to our paternal great grandmother, Jessie Luetta Halstead Brittain. What a nice surprise! I thought that Cindy might like to have Grandma's silverware set, and I'm happy that she'll get to think of Great Grandma Brittain whenever she uses it.

I was most excited, however, that Ann had Great Grandma Brittain's Common School Diploma. I eagerly took Ann up on her offer to send it to me, and this is what showed up at my office a few days ago: 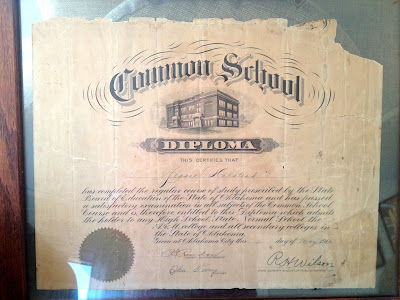 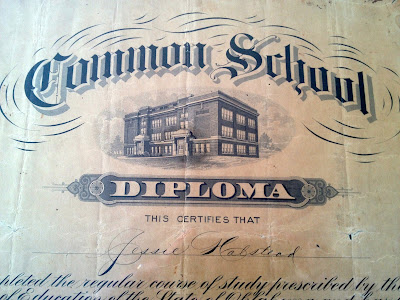 THIS CERTIFIES THAT
Jessie Halstead

has completed the regular course of study prescribed by the State
Board of Education of the State of Oklahoma and has passed
a satisfactory examination in all subjects of the Common School
Course and is, therefore, entitled to this Diploma which admits
the holder to any High School, State Normal School, the
A&M college and all secondary colleges in
the State of Oklahoma.

Given at Oklahoma City this 5th day of May 1915

As you can see, someone had the diploma framed in double-sided glass, which was nice because Grandma Brittain's test results were recorded on the back of the document. I had a chuckle at her 70 score in arithmetic. My own former math teachers would agree that the apple did not fall far from this branch of the family!

Grandma Jessie was 16 years old when she passed her exams and received her diploma. I'm guessing that she and her family were very proud, especially since a lot of rural kids, especially girls, didn't complete their education back in those days. I don't know if she went on to high school, but she didn't marry my Great Grandfather, Andrew Lee Brittain, until after another four years, so it's entirely possible that she did continue her studies.

Grandma's diploma now hangs in my bedroom. I'm quite proud of her for her scholarly achievement -- mediocre math grade, and all!

Thanks again to Cousin Ann for sharing this treasure with me!

Print Friendly
Posted by Wendy B. at 8:20 AM