While virtually all of my dad's family history can be traced back to the 1600s and 1700s in America, most of my mom's family became Americans more recently. I'm finding it a bit difficult to locate some of the naturalization papers of my ancestors. For example, I know that my GGG grandfather, Claus Schlichtmann, was naturalized on September 13, 1877, in San Francisco. Well, I'm finding that the 1906 San Francisco earthquake and subsequent fire seem to have destroyed a good lot of documents that were held in San Francisco, including naturalization papers. Le sigh...

Meanwhile, I've had the good fortune of finding a copy of the actual naturalization certificate of my great grandfather, Lars Hansen Madsen, in my mom's files. 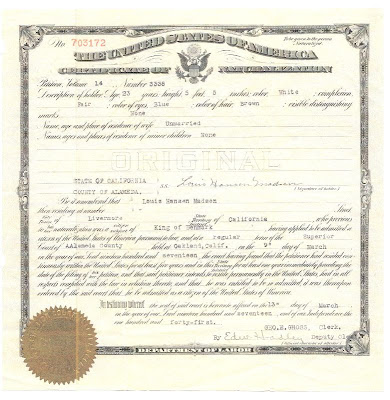 This document is chock full o' interesting information about Grandpa Louie (1893-1971), who was born in Denmark and immigrated to California in 1908. For example:
I look forward to finding the naturalization papers for my other immigrant ancestors to see what else I can learn about them!