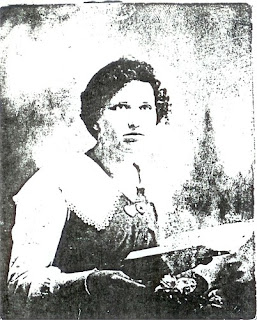 Jessie Luetta Halstead Brittain was one of my great grandmothers on my dad's side. Great Grandma Brittain was born on September 13, 1898 in Indian City, Payne County, Oklahoma. She was married to Andrew Lee Brittain, and was mother to Woodie (my grandfather), Audrey, Pauline and Evelyn.  She died on July 10, 1974, while on a trip home to Oklahoma to visit family.

My sister, Cindy, and I were lucky that we got to know Great Grandma Brittain during her visits to California.

Visitation may be made at The Fairley Home until noon on Friday, when Mrs. Brittain will be transported to Oakland, California, where funeral services will be directed by the Grant Miller Mortuary of Oakland.