This clipping is taken from a more recent issue of my hometown newspaper, the Tracy Press, in Tracy, California. I love that the Tracy Press does a regular "Remember When" series, when they re-tell stories that were local news ten, 25, 50, 75 and even 100 years ago. I don't have the date of this particular issue (drat whoever neglected to make note of that on the clipping), but I'm guessing it's from 2003 since it refers to a photo that was taken in 1903. 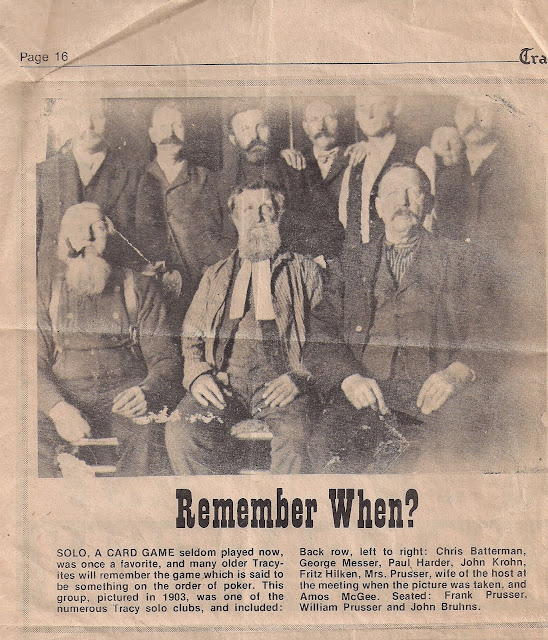 I'd never heard of Solo, the card game to which the story refers. However, a quick Google search, and knowing that most of these men hailed from Germany, lead me to believe that they played a game known as German Solo that looks like it might be fun.

This photo, and the story that goes along with it, also makes me wonder if this was strictly a men's game, or if women were ever invited to join in the fun. There's one woman in the photo (Mrs. Prusser, seen peeking over the shoulders of a couple of tall men), but since it was taken at her home, I'm guessing she was being a gracious hostess while the men played their game. I wonder what the other wives were doing while their men were out playing cards. I sure hope they had a fun club of their own that I can tell you about in a future post!