Amanuensis. I'll bet this is a new term for some of you. It certainly was for me when I first started this blog, and I think it's really cool. According to Thomas over at Geneabloggers:


An Amanuensis is a person employed to write what another dictates or to copy what has been written by another. Amanuensis Monday is a daily blogging theme which encourages the family historian to transcribe family letters, journals, audiotapes, and other historical artifacts. Not only do the documents contain genealogical information, the words breathe life into kin – some we never met – others we see a time in their life before we knew them.

John Purser was born in January 1750 in Mecklenburg, NC, and died there on March 28, 1826. He married Susannah Cuthbertson, whose father is believed to be David Cuthbertson (who is mentioned in John's will). John and Susannah raised seven children: Richard, David, Moses, Sarah, Elizabeth, Lydia and Dorcas -- all named in John's 1826 will.

A couple of weeks ago, I managed to find someone online who had a microfilm scan of John Purser's will. Until then, I'd only heard that it existed, and figured I'd have to write to Mecklenburg County or the North Carolina State Archives to ask for a copy (which could take weeks). I received a copy of the scan within two days. It came from a microfilm scan that was taken from the North Carolina, Mecklenburg County Will Book F, p. 102. What's exciting for me is that the document seems to show the relationship between John and his son (my 4th great grandfather), Richard William Purser.

It's really difficult to read online, so the transcription is below. Please note that I've attempted to transcribe the document exactly as it was written. This includes any grammar or spelling errors. Some of the document was so faded or blurred that I just couldn't make out what was written, and I've noted that where applicable. 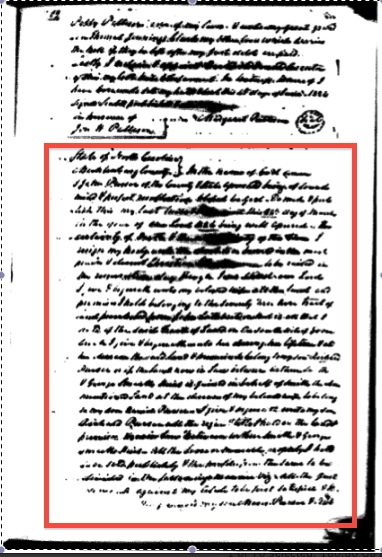 State of North Carolina }
Mecklenburg County    } In the Name of God Amen
I John Purser of the County and State aforesaid being of sound mind & perfect recollection blessed be God - Do make and publish this my last will and testament this 28th day of March in the year of our Lord 1826 being well assured of the certainty of Death and the uncertainty of the time I resign my Body unto the dust to be buried in the most plain & decent Christian like manner to be raised in the Resurrection day through Jesus Christ our Lord. I will and bequeath unto my beloved Wife all the land and premises I hold belonging to the Seventy three acre tract of land purchased from John Cuthbertson that is all that I hold of the tract of land that I hold on the south side of Goose Creek I give & bequeath unto her during her lifetime & at her decease the Said land & premises to belong to my son Richard Purser or if the Land now in Law between Arthur Smith & George Smiths heirs is gained in behalf of Smith the above mentioned Land at the decease of my beloved wife to belong to my son David Purser. I give & bequeath unto my son Richard Purser all the right and title I hold on the Land & premises now in Law Between Arthur Smith & George Smiths Heirs ~ All the Loose or moveable property I hold to be sold publickly & the profits arising from the Same to be divided in the following manner Viz ~ All the Just demands against my Estate to be first Satisfied and [faded and unreadable] my son Moses Purser & Rob [may be missing a line] Purser & my daughters Sarah & Elizabeth & Lydia & Dorcus five pounds each [faded] with all the monies either due or in hand to be equally divided between my beloved wife & my son David Purser & Richard Purser ~ And I hereby make and appoint William Byron Junr of this my Last Will & Testament.
Published and Signed Declared in the presence of us the date before mentioned
Attest: James Simpson                              John Purser {Seal}
Brazil Morse

Now, I need to get the rest of my documents together to send to the DAR for review. If they are accepted, then I'll be able to claim John Purser as an official Revolutionary War patriot!