(Not so) Wordless Wednesday: The Madsens in Ærø, Denmark

Here's another wonderful, old family picture that my cousin, Vikki, has shared with me. It's a photo of our great great grandparents, Laurits Hans Madsen (1839-1934) and Kirsten Terkelsen Madsen (1850-1925), and nine of their 11 children, in Ærø, Denmark.

I've already written quite a bit about my great grandpa, Lars Hansen (Louis) Madsen, and shared several photos of him as an adult. I just love seeing this photo of him as a little boy (he's the cutie in front on the right) with his mom, dad and siblings! I especially love that it was taken in his homeland of Denmark. One of these days, I'm going to get over there to see the old family farm where Grandpa Louie, and several generations before him, grew up (and which still exists -- I've seen pictures!). 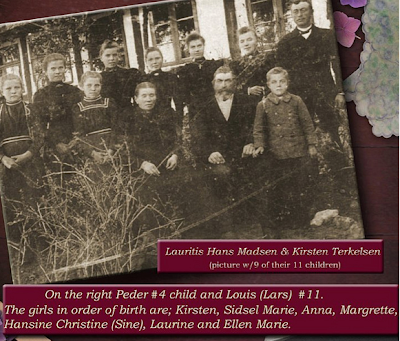 I'm guessing that this photo was taken sometime around 1900. His oldest brother, Hans Terkelsen Madsen, had already blazed the path to California in 1891, and was not included in the photo. Grandpa Louie was born on September 24, 1893, and immigrated from Denmark to California in 1908 when he was just 14 years old. I'm sure his parents and siblings who stayed behind must have missed him greatly. I'm lucky that he moved here and stuck around long enough for me to get to know him!