I love American history, and am fascinated by both the Civil War and the American Revolutionary War. Having ancestors who fought in both wars, and helped shape our country, makes it all even more exciting. When I first discovered that I could find actual Revolutionary War pension applications and documents for my very own ancestors, I was beyond thrilled! This means that I get to read my own patriots' history and accounts of their activity and participation in the birth of our nation.

Here's part of the Revolutionary War pension application that my 5th great grandfather, James Carr Veale, submitted in 1832.  Several acts allowed veterans and widows of the Revolutionary War to apply for pensions. The act of 1832 stated that every officer or enlisted man who had served two years in the war was eligible for a pension. If the veteran died after being granted a pension, his widow or children could apply to collect any money due from the date of his last payment until his death. I've found several comprehensive records of Revolutionary War pension applications via my Ancestry.com and Footnote subscriptions, and I love it when they help me follow the footsteps of my patriots as they fought the war.

The actual file from James Carr Veale is pretty large (over 60 pages), so I will transcribe some of it in parts. These three pages are James' own sworn account of his service in the war. I've transcribed them exactly as they are written, including any spelling or grammatical errors. 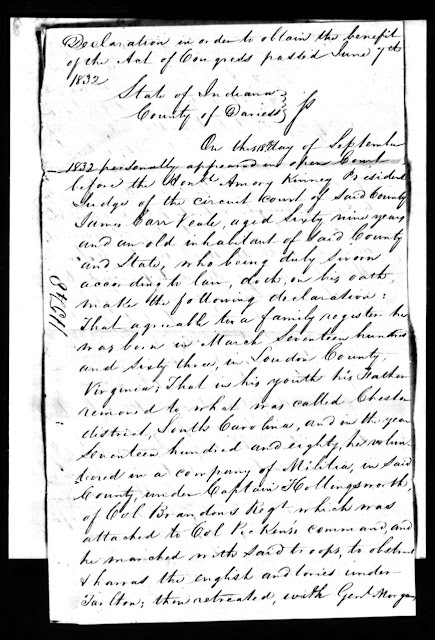 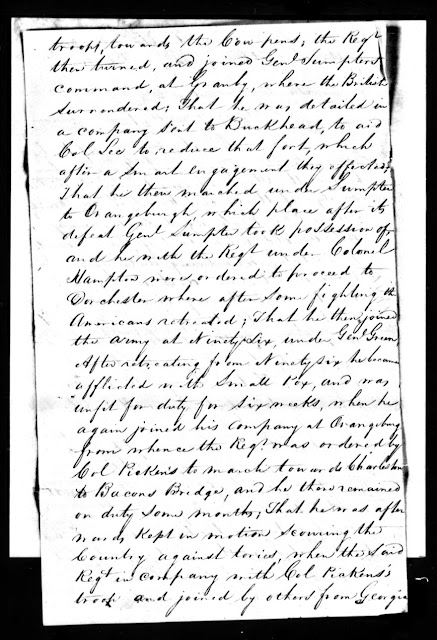 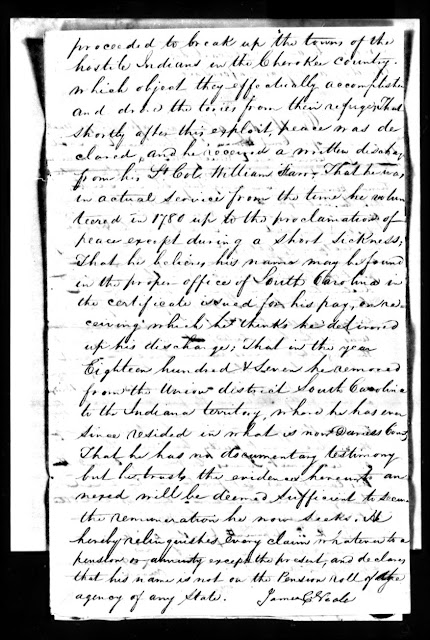 On this 18th day of September 1832 personally appeared in open court before the Honbl Amory Kinney President Judge of the circuit court of said county James Carr Veale, aged Sixty nine years and an old inhabitant of said County and State, who being duly sworn according to law, doth, on his oath, make the following declaration: That [???] to a family register he was born in March Seventeen hundred and sixty three, in Loudon County, Virginia; That in his youth his Father removed to what was called Chester district, South Carolina, and in the year Seventeen hundred and eighty, he volunteered in a company of Militia, in said county, under Captain Hollingsworth, of Col Brandon's Regt which was attached to Col Picken's command, and he marched with said troops, to obstruct and harras the english and tories under Tarlton; then retreated, with Genl Morgan's troops, towards the Cow pens, the Regt then turned, and joined the Genl Sumpters command, at Granby, where the British surrendered; That he was detailed in a company sent to Buckhead, to aid Col Lee to reduce that fort, which after a smart engagement they affected; that he then marched under Sumpter to Orangeburgh which place after its defeat Genl Sumpter took possession of, and he with the Regt under Colonel Hampton were ordered to proceed to Dorchester where after some fighting the American's retreated; That he then joined the army at Ninety-Six, under Genl Green. After retreating from Ninety-Six he became afflicted with Small Pox, and was unfit for duty for six weeks, when he again joined his company at Orangeburg from whence the Regt was ordered by Col Pickens to march to wards Charleston to Bacons Bridge, and he then remained on duty some months; That he was afterwards kept in motion serving the Country against tories, when the said Regt in company with Col Picken's troop and joined by others from Georgia proceeded to break up the towns of the hostile Indians in the Cherokee Country. Which object they effectually accomplished and drove the tories from their refuge. That shortly after this exploit, peace was declared, and he received a written discharge from his Lt. Col William Farr. That he was in actual service from the time he volunteered in 1780 up to the proclamation of peace except during a short sickness, That he believes his name may be found in the proper office of South Carolina in the certificate issued for his pay, on receiving which he thinks he delivered up his discharge; That in the year Eighteen hundred & Seven he removed from the Union district of South Carolina to the Indiana territory, where he has ever since resided in what is now Daviess County. that he has no documentary testimony but he trusts the evidence hereunto answered will be deemed sufficient to secure the remuneration he now seeks. He hereby relinquishes every claim whatever to a pension or [???] except the present, and declares that his name is not on the Pension roll of the agency of any state.
James C. Veale

As you can see, I've linked to a few websites that detail some of the battles that James Carr Veale bravely fought. This man saw quite a bit of action, and even jumped back into the war after suffering a bout with smallpox, a disease which killed many of his fellow soldiers. James and his family moved to Daviess County, Indiana, in 1806. James died on January 14, 1839, in Veale Township, the town named after his family.