Here's the marriage record of my third great grandparents, Andrew Jackson Veale (1828-1904) and Elizabeth Miller (1828-1908). They were married on August 22, 1849, in Pike County, Indiana. Andrew grew up in Veale Township, Daviess County, Indiana, which was just a few miles from where they got married. In the 1850 US census, it appears that Andrew and Elizabeth were living with her family in Pike County. 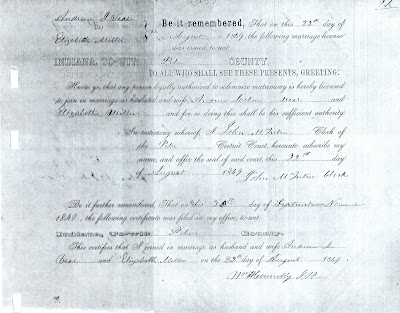 It's kind of hard to read the faded copy of this document, so I've transcribed it here:


Indiana, To Wit: Pike County
TO ALL WHO SHALL SEE THESE PRESENTS, GREETING:

Know ye, that any person legally authorized to solemnize matrimony is hereby licensed
to join in marriage as husband and wife Andrew Jackson Veal and
Elizabeth Miller and for so doing this shall be his sufficient authority.
In testimony above I, John McIntire, Clerk of
the Pike County Circuit Court, hereunto subscribe my
name, and affix the seal of said court, this 22nd day
of August, 1849.


Be it further remembered, That on this 25th day of  September November
1849, the following certificate was filed in my office, to-wit:
INDIANA, TO-WIT: Pike County.

This certifies that I joined in marriage as husband and wife Andrew J.
Veal and Elizabeth Miller on the 22nd day of August 1849.

Andrew and Elizabeth had eleven children, including my great great grandfather, George Elmer Veale (1850-1928). Sadly, by the 1900 US census, only five of their children were still living. They moved with their family from Indiana to Wabaunsee County, Kansas, arriving on Thanksgiving Day 1879. They remained there for the rest of their days.

Earlier this year, I posted about Andrew and Elizabeth's obituaries. I loved learning that they were the first couple in Maple Hill, Kansas, to have enjoyed a golden wedding anniversary, a testament to their strong bond.

Here's how I'm descended from Andrew and Elizabeth Veale: